As a child I was always enthralled by cooking and cooking shows. My grandfather was the head chef while he served in World War II; and he brought his love of cooking home with him. Cooking was never a ‘woman’s job’. It was an art that was enjoyed because food was something that we enjoyed. As I grew up the the bevy of cooking shows started to build up on TV and I loved them all. My TV time in the 80s was mostly made up of reruns of Julia Child, Justin Wilson’s cajun inspired cooking shows on PBS, and Great

Chefs of America/Great Chefs of the World. This continued throughout the 90s when my family got a big satellite dish in the backyard which coincidently was the time that the Food Network started broadcasting. The introduction of shows from Bobby Flay and Mario Batali also brought Emeril Lagasse and Rachel Ray. I was in love with cooking and was one step away from going to culinary school. I won’t divulge you with the real reason that I didn’t go to culinary school (I’ll just say that the closest one was about 6 hours from my home and I had a girlfriend…so…you do the math).

I went on to college and continued to enjoy cooking in my spare time. My roommate and I would invite friends over and always enjoyed cooking for them. This trend continued into my 20s after graduating from college. It was about that time that a new cooking show trend started. The ‘traveling’ show that highlighted not only food but the chef/host of the show eloquently spoke to you. It was like a well written essay that centered around some of the most interesting people and places in the world. I became obsessed with Andrew Zimmern and Anthony Bourdain. Anthony Bourdain’s panache and deft writing ability amplified the sometimes unremarkable places he visited. 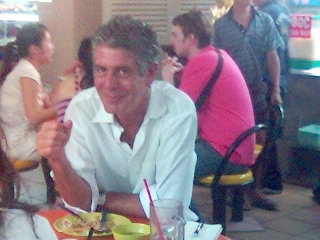 Anthony Bourdain had shot to Pop Culture fame in 2000 when his best-selling book Kitchen Confidential: Adventures in the Culinary Underbelly exposed the rest of the world to the dirty underbelly of the culinary world; where he candidly wrote about his drug use among other tantalizing topics. I remember his face first becoming relevant in the culinary world when he started appearing on the Food Network in 2002 on his show A Cook’s Tour. Then three years later his superstar status skyrocketed when his hit Emmy award winning TV show Anthony Bourdain: No Reservations started on the Travel Channel. He jumped to CNN in 2013 with a new show called Parts Unknown which is where we would find him traveling the world for 250 days a year. The show is in its 11th season and it was in France, where he was working on and filming and episode of his show, where they found him dead in his motel room this morning. It was reported this morning that he was found by his best friend and fellow celebrity chef Eric Ripert, who was there filming with him. He had died of an apparent suicide by hanging.

The Anthony Bourdain that I watched on TV was and is unapologetic. His insight,eloquent words and delightful descriptions brought a poignant beauty into the world. He was one of my idols. I can recall many episodes of his TV shows that have left me in tears. The bitter slap of reality that he hit us with is real. It was never evident by watching his shows that he was suicidal; but most of the time it never is. If you are in the US and need someone to talk to you can contact the US National Suicide Prevention Lifeline at 1-800-273-8255 or the Crisis Test Line by texting HOME to 741741. Those of you from the UK can call the Samaritans at 116123.

Anthony Bourdain’s eloquent and sometimes crass descriptions have impacted me. I will pray for the ones he left behind: his loved ones and especially his friend Eric Ripert. Anthony’s extraordinary storytelling on his TV shows brought the world into our homes and not only that but he inspired us to go out and visit those places. Anthony Bourdain I hope that you have found peace. Know that your words have always inspired us; but leaving us with an ellipses instead of a period has impacted us immensely. You will be greatly missed.