Another WrestleMania has come and gone but this WrestleMania did not leave many wrestling fans unscathed despite many positive moments. The wrestling fan has gotten used to not having the results that we had planned out in our heads (or written about in our blogs or spent hours talking about on podcasts for that matter) but we are used to being left with a feeling of regret (again despite any good things that might have happened.

Less than 48 hours ago, we were all hanging in suspense, waiting for the beginning of what would become (in my opinion) a lackluster WrestleMania.  As I stated earlier, fans will never get exactly what they wanted because the diverse fan base would never agree to one specific story line but there were many letdowns at WrestleMania 33. Does this mean that I didn’t enjoy it? Most definitely not. Does this mean that there could have been things to improve?

Before I rip into how the WWE failed me as a wrestling fan during this year’s WrestleMania…I will tell you what they did right.

Now that I’ve said the positives….let me tell you what let me down. Here are Top Cat’s Tuesday Top 10: WrestleMania 33 letdowns:

10. The ramp – Yes its cool that you had the longest entrance ramp in WWE history but there is a negative to having the longest entrance ramp in WWE history. THE NEGATIVE IS THAT IT TAKES FOREVER FOR THEM TO GET FROM THE CURTAIN TO THE RING! HHH had to ride a motorcycle just not be exhausted by the time he reached the ring. Sometimes Vince needs to realize that the spectacle’s massive scale doesn’t always guarantee reward.

9. John Cena’s proposal – I love John Cena. I really do. I love the Miz. I really do. But the match between Cena (plus one) and Miz (plus one) felt forced. It felt forced by the WWE to make us want to love the Bella’s again. John Cena is the shining star of the WWE; and he and the Miz have had some amazing matches in the past (even at WrestleManias in the past) but this was not a WrestleMania caliber match. This was a primetime Raw or Smackdown match at best. Good job at the string pulling John. You won those brownie points.

8. Card placement – The card felt jumbled. Something didn’t feel right but having the Smackdown Diva’s Championship match to be the Top 3 matches of the night? WASTE OF TIME SLOT! The Raw Women’s Championship match was a formidable replacement. The athleticism of Charlotte Flair, the Boss-ness of Sasha Banks, the strength and power of Nia Jax taking on the huggable Bayley would have been a better option for that time slot.

7. Waste of Big Show’s Last WrestleMania – The Big Show has slimmed down a lot. He has gotten a hold on his health and looked amazing. He is still a Monster in my opinion but the WWE dropped the ball in honoring the veteran on his last WrestleMania. The Big Show has been a feather in the hat of wrestling for years, and deserved one last push before he exited.

6. The Andre the Giant Battle Royal – Speaking of The Big Show. Though Vince usually loves the Monsters and Big Men, big men like Braun Strowman, Mark Henry and even The Big Show got booted from the Royal Rumble match early on. Instead of allowing The Big Show to win the match in his last WrestleMania appearance or utilize the amazing talent that is Braun Strowman, the WWE liked the story line and star power appeal that Mojo Rawley’s best friend (New England Patriots party-boy tight end Rob Gronkowski) brought to the ring. They knew that it would cause headlines to pop up all over the place and from a marketing standpoint, I understand. From a fan of Rumble style matches…I disapprove.

5. Bray Wyatt’s Bugging-out gifs – Would was slated as a gross out or fear inducing

moment from one of the most talented wrestlers in the WWE ended up as a corny deterrent. The distraction technique did not deter Bray Wyatt’s neck from finding an RKO right out of nowhere. So the childish bug gifs were a slap in the face to the brutality and heartbrokenness that we saw leading up to the WrestleMania. 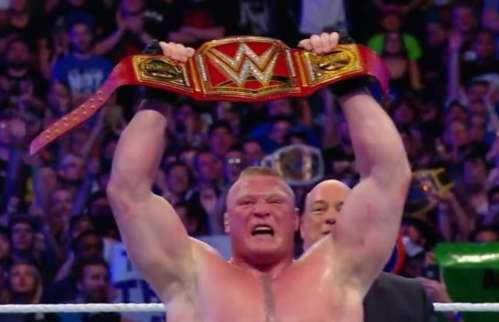 4. Goldberg/Brock Lesnar – Don’t get me wrong, I was a huge Goldberg fan back in the
WCW days and even in his WWF/WWE days BUT this time a title reign felt pushed. I loved the fact that he easily defeated the Beast-incarnate Brock Lesnar. It had me hyped up! He had Brock’s number and that was how it should have stayed. I’m tired of Brock. It’s that simple.

3. Former BFF Fight: Kevin Owens vs Chris Jericho – I have never been a fan of Y2J Chris Jericho and his annoying antics with his then bff Kevin Owens just extended my hatred of his pompous character. The fact that the WWE placed a ‘former bff’ “you were never my best friend” fight on a WrestleMania card is preposterous! It could have culminated at a PPV sure but it was by no means WrestleMania worthy.

2. AJ Styles – When AJ Styles came to the WWE, I was truly excited. He was my favorite wrestler in TNA and as he went from ROH to Japan where he expanded the already huge popularity of the Bullet Club. He rode that success wave to America where he joined the biggest wrestling organization in the world: the WWE. Here he has won the Heavyweight title and feuded with top stars. SO….why make him turn and be the whining ‘why am I not a star’ wrestler? Why not use his abilities as they are and give him the push he deserves?!? He is the best pound for pound wrestler in my opinion and he should be given the push he deserves. 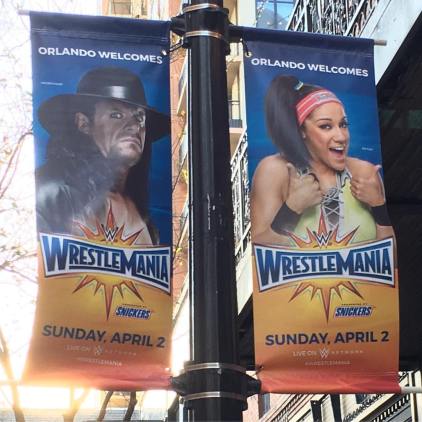 WrestleMania 33 set up image by and attributed Lee Dyer from Preston, Lancashire, United Kingdom – Live for WrestleMania 33, and the incredible set up for it! Just Amazing! #WrestleMania #WrestleMania33 #Florida #Orlando, CC BY-SA 2.0, https://commons.wikimedia.org/w/index.php?curid=57698644

Charlotte with Belt image by and attributed to Tabercil – Own work, CC BY-SA 3.0, https://commons.wikimedia.org/w/index.php?curid=50251230