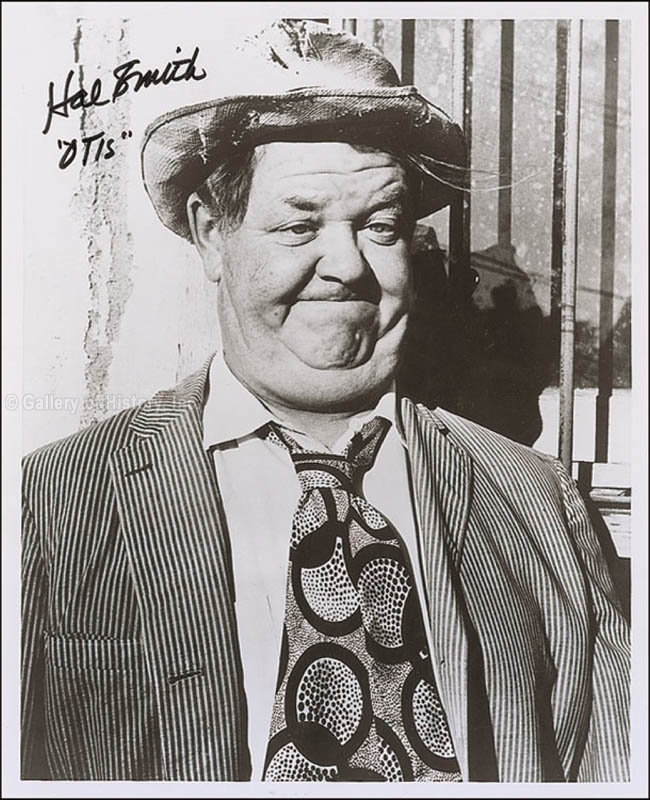 A lot of people from my generation and older grew up watching The Andy Griffith Show. The show, packed with wholesome goodness, aired on CBS from 1960 to 1968, maintained a high Nielsen rating its entire run. The reason for most of its success was the small-town of Mayberry’s memorable characters. Characters like the goofy yet lovable deputy Barney Fife played by Don Knotts. Even the show’s namesake Andy Griffith thought he would be the comedic character on the show due to years of being a stand-up comedian; Griffith decided to play the straight man to Don Knott due to his immense popularity early on. Don’t feel too bad for Griffith because his created character, Andy Taylor, was ranked number 8 in TV Guide’s list of the “50 Greatest TV Dads of All Time“.

Other memorable characters included the lovable Aunt Bee (who was not that lovable off-screen). Maybe you’d want to get a haircut from the gossiping, stuttering Floyd the Barber (yes, like the Nirvana song)? You might also remember Mayberry’s resident auto mechanic Gomer Pyle and his dim-witted cousin Goober Pyle (who received a real-life whack over the head from Frances Bavier, the actress who portrayed Aunt Bee) for cursing on set. And I am sure you remember a character who was in more episodes than Gomer — the town drunk Otis Campbell.

Though Otis Campbell, played by Hal Smith, was almost always drunk (and most of the time was spent behind the jail door that he unlocked and closed), the recurring character delivered some of the show’s most memorable moments. Otis’s persona was more than that of the town drunk; much like the man who portrayed him, Hal Smith was a diverse man. Hal Smith surprisingly began his career not as an actor but as a singer. Growing up in upstate NY, a teenage Smith (going by the name Harold Smith) joined a group of crooners and impressionists called Johnny Morrison & His Krazy Kats. One of their performances had Smith dressing up as a prisoner and showed up performing behind bars. (oh, the foreshadowing.)

After continuing in the music world, Smith worked as a DJ at the upstate New York radio station WIBX as well as serving in the Army during WW2 before moving to Los Angeles. He landed multiple roles in multiple shows, including the role of Santa Claus on both The Brady Brunch and the Flintstones (a character he would reprive many times in many different forms). Other than voicing Santa Claus on the Flintstones, he would find himself voicing characters on countless other cartoons. In the early 1960s, one of the first Synchro-vox (aka ‘moving human lip’) cartoons from the creators of Clutch Cargo was a limited run series called Space Angel. On this show, Hal Smith’s character was a space engineer with a thick Scottish accent. Sound like another character from a 60s TV show? Though he longed to create a show of his own, Hollywood rejected several of the pilot ideas Gene Roddenberry was pitching after years of writing for various TV series during the mid-1950s. It wasn’t until his pitch for a multicultural crew who braved outer space in a spaceship called the Enterprise that he had found something special. Roddenberry found inspiration in many places for his characters, but Hal Smith’s character from Space Angel was Gene Roddenberry’s inspiration for the Star Trek character Scotty.

Hal Smith not only helped to inspire the creator of Star Trek, but he voiced characters for almost every major animation studio. He was the first voice of Owl in the original Winnie the Pooh features and then would move on to work as a substitute for many other character’s voices. He voiced Elmer Fudd after the death of Arthur Q. Bryan took on the role of Goofy when original voice actor Pinto Colvig passed away (in addition to dozens of other characters throughout the years).

All in all, Otis was Smith’s most memorable role, but the actor’s career and life are so much richer than that one role. Smith ended his career credited with over 300 film and TV roles. He will live on as long as The Andy Griffith Show is in syndication (which that is going to be forever) and his influence is peppered throughout the pop culture universe.