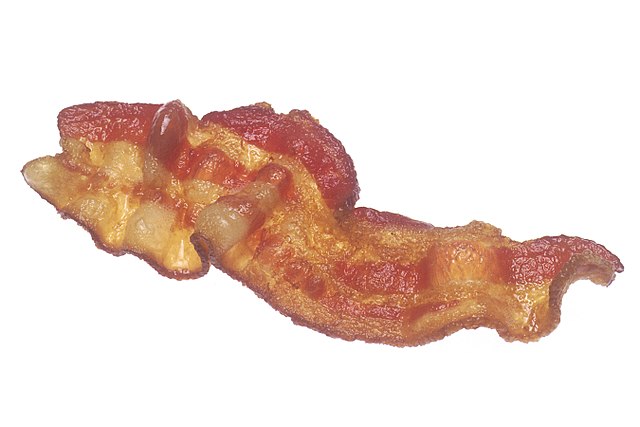 Food Network’s recipe section has over 6,600 recipes utilizing bacon as a key ingredient. Recipes ranging from fancy Bacon-wrapped dates to the soul-warming bacon-tomato linguine to the extra fattening brown sugar candied bacon. I mean they have vegan bacon and vegetarian bacon. Bacon Bits for your salad. Heck, even comedian Jim Gaffigan did a 15 minutes straight comedy bit on how great bacon is. And it would just appear that we love bacon. 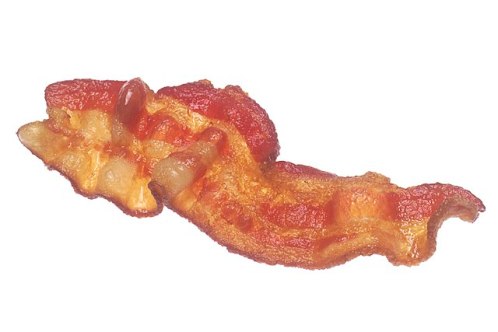 According to Google, “Bacon” is searched for more than 6 million times every single month; and more than 200,000 people go online looking for “bacon recipes”. That’s not quite as many times that we Google “funny cats” (which is searched more than 360,000 times monthly) but it is an incredibly large amount. Speaking of incredibly large amounts. There is an average of 908 million pounds of bacon sold in the US per year and taking that average into account, the average American eats nearly 18 pounds of the delicious cured, smoked pork. Despite all this love, we know that bacon is bad for us. But knowing that it is so bad for us, why do we keep frying up bacon for breakfast?

Imagine that last time you woke up to find your spouse, parent or roommate cooking bacon. The mere smell can cause you to zombie walk your way through the corridors and hallways into the kitchen to hopefully nab a piece of bacon before the preparation of breakfast is even completed. The addition of bacon can send something as boring Brussel sprouts or as plain as a salad into the realm of deliciousness. So what makes bacon taste so dang good? The basis for bacon’s delicious flavor begins with the meat. That cured,

smoked, and thinly sliced pork belly that evokes a specific taste. Guy Crosby (a food scientist and science editor for America’s Test Kitchen) says that ‘some of the major flavor players are the result of the pork belly’s fat breaking down’. In flavor chemistry, a single molecule envokes a specific taste. For example, you can find the organic compound isoamyl acetate in the banana and therefore is the reason why that specific taste is triggered. But bacon is much more complex than a banana. There is a mixture of compounds that create the bacon flavor that we all love.

As I stated earlier, it all boils down to the pork belly itself which is cured, smoked, and thinly sliced. The breaking down of the fat is one of the major building blocks of the flavor maker. The cell membranes of the belly muscle tissue contain certain fatty acids that break down during the cooking process to break forth a bounty of flavorful compounds. The cooking brings out aldehydes, furans, and ketones — by themselves have 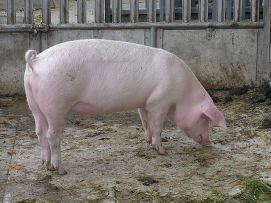 distinct tastes or smells (ie the aldehydes have a grassy flavor) but when they are together…something beautiful is released. The smoking wood releases acrid-smelling phenols, as well as a sweeter-smelling compound called maple lactone. That is what creates the ‘smoke’ that we taste in foods. When bacon is cured, they take on yet another flavor compound. The fat itself is a result of the food that the pigs eat, and research has shown that by changing the food (reducing the fats that the pigs ingest) literally causes a different chemical reaction in the process of cooking and causes the meat to form differently. 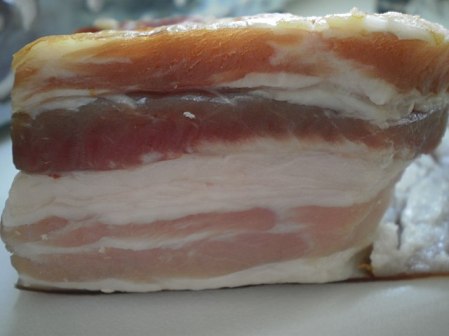 And who doesn’t love bacon fat? We have to love fat period! Scientists have confirmed that fat is the sixth basic taste (called oleogustus: oleo being a Latin root word for fatty while gustus refers to taste). According to a Purdue University study, “most of the fat we eat is in the form of triglycerides, which are molecules comprised of three fatty acids.” Richard D. Mattes, professor of nutrition science at Purdue University says that the “triglycerides impart appealing textures to foods like creaminess. However, triglycerides are not a taste stimulus. Fatty acids that are cleaved off the triglyceride in the food or during chewing in the mouth stimulate the sensation of fat.” Understanding this aspect of taste and how our tastebuds react to sweet, salty, umami, bitter, sour and now fat; we can get a clue as to why bacon is the thing that we add to stuff to make it taste better. Despite all the research, bacon is just delicious; but its nice to know that we have the science to prove that its worthy of its popularity. 🙂

Fried Bacon by Renee Comet (Photographer) – This image was released by the National Cancer Institute, an agency part of the National Institutes of Health, with the ID 2686 (image) (next)., Public Domain, https://commons.wikimedia.org/w/index.php?curid=24036670

Bacon in a pan by Joy – Making a BLT sandwich with avocado and basil mayonnaise, CC BY 2.0, https://commons.wikimedia.org/w/index.php?curid=35345135