While re-watching Tombstone, for what I am sure was the 100th time, I couldn’t help but think about the selected phrases and words that the scriptwriters chose to use. Colloquial phrases like ‘well I’ll be John Brown‘ and ‘ace in the hole’ may still be used today; but a lot of the phrases used in Westerns (specifically Tombstone) are foreign to our modern dialect. As an English major in college, literature was important to me but the history of language and the words that we use are a topic that I can’t steer too far from. So since I love researching, and honestly because I wanted to know myself; I decided that I would look into some of the most famous quotes from Tombstone and find out what they actually meant.

If you have seen the 1993 movie Tombstone, it is hard to forget Val Kilmer’s portrayal of infamous gunslinger, gambler, and occasional dentist Doc Holiday. His most famous line and most important part (in my opinion) is his response to the question prompted by drunken Cowboy Johnny Ringo who yells out “Isn’t anyone here man enough to play for blood?” He comes down from the porch of the barber shop with gun in hand and exclaims, “I’m your huckleberry.” Besides the saying still giving me goosebumps after 20 years later, I have always wondered about the origins of one of my favorite movie quotes. The quote actually showed up first in Walter Noble Burn’s book Tombstone: an Iliad of the Southwest which was first published in 1927. Despite his book being a mixture of fact and fiction, it popularized the legend the lawman-gunfighter Wyatt Earp and the legend surrounding him.

The book was influential to subsequent generations of historians, novelists and screenwriters; including the writers and researchers of the 1993 Tombstone movie. The writers even used some of the dialogue that Burn reports was actually spoken by Holiday himself in the real encounters. The old Southern saying ‘I’m your Huckleberry’ is 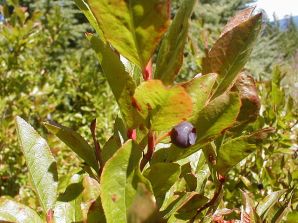 rumored to have been in reference to the Mark Twain character, Huckleberry Finn, and thusly the speculation is that the “huckleberry” could mean a friend. No one can confirm this speculation or the speculation that Doc Holiday actually said “I’m your huckle bearer”. This is of course in reference to the handle on a casket from the late 1800s which was called a huckle. If Doc was referring to himself being Ringo’s huckle bearer, then that means that he would be the one to carry his casket. Sounds like a logical explanation but the only thing that we do know is that in the 1800s, a huckleberry was used in conjunction with a ‘persimmon’. The huckleberry, being a small berry, was compared with the larger but less appetizing fruit as a unit of measure. The saying derived was “I’m a huckleberry over your persimmon” and meant that ‘I’m just a bit better than you.” As a result the huckleberry denoted not only a unit of measure meaning a ‘tad’; but it was a self-deprecating term used to mock the other person. Throughout the latter portion of the 1800s, the saying “I’m your huckleberry” started to be used to say that “I’m just the man that you’ve been looking for.” And I think that that is exactly how Doc meant it.

The altercation between a drunken Ringo and Doc was postponed at that time by Ringo being taken away by his fellow Cowboys; but it was after the second time that he used the “I’m your huckleberry” phrase that we find him killing Ringo in a shootout and using another unclear phrase. As blood is pouring from the bullet wound above Ringo’s eye; Doc says to him, “you’re no daisy, you’re no daisy at all.” This one is a little easier to explain because in the late 19th century, the term ‘daisy’ was a common slang term that referenced something or someone as ‘the best in its class’. This coincidentally was not the first time that Doc referred to someone as a ‘daisy’. During the gun fight at the OK Corral, we find historical truth in another one of the statements from the movie. It was reported in the Tombstone newspaper in the days following the actual gun fight that when confronted by one of the cowboys at point blank range, the cowboy was heard to say, “I got you now Doc, you song of a bi*ch.” Doc just cockily smiles back at him and says, “you’re a daisy if you do!” 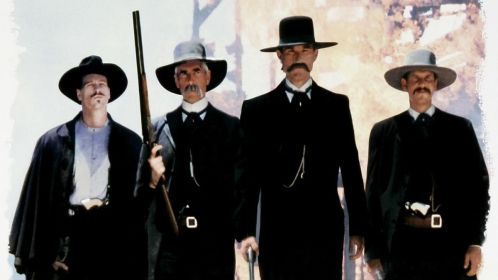 The last gunfight between Doc Holiday and Johnny Ringo was meant to be a showdown between Johnny Ringo and Wyatt Earp; but knowing that Wyatt was not quick enough on the draw, Doc snuck to the spot in the woods where the fight was to take place before Wyatt could get there. Doc walked up with his hat pulled down over his eyes and Ringo argues and says that his fight is not with Doc; but Doc reminds him that they had started a fight that they never got to finish. So Ringo agrees to the fight and says, “alright lunger”.

For many years, I thought he was saying ‘longer’ a reference to Doc’s lean silhouette but he was actually calling him a ‘lunger’. Doc is repeatedly called a ‘lunger’ throughout the film as it was a derogatory term that was used in that time to refer to someone who was suffering from tuberculosis. What is unknown to many is that Doc had contracted tuberculosis in 1872 while working as a respectable dentist in Atlanta; but was advised to move to a more arid climate. He moved his dentistry practice to Texas but he loved taking people’s money while playing cards more than fixing people’s teeth. He became skilled at playing faro and became a renown poker player. He was arrested in 1975 after being involved in a shootout; which led to Doc drifting from boomtown to boomtown making his living on the card tables. The heavy drinking, smoking, and riotous living led to an aggravation of his tuberculosis. He sadly died in 1887 at the age of 36 in a sanitarium in Glenwood Springs, Colorado. His last words in the film and in real life were, “well I’ll be damned”. An statement not exclaimed in the film but in real life, Doc states that because when he looks down at his bear feet sticking out of the blankets, he exclaims “well I’ll be damned” because he always swore that he’d die with his boots on.

I’ve talked a lot about the lines from Val Kilmer’s portrayal of Doc Holiday because honestly he takes that movie to a spectacular level; but there are many times that Wyatt Earp owns the scene. From his promise to bring Hell with him to avenge his brother to his threat to one of the Cowboys to turn his head into a canoe with a shot from his pistol; Wyatt was quite the quick tongued devil himself. One of the most memorable scenes in the movies happens early on with an altercation between a loud-mouth faro player Johnny Tyler and Wyatt Earp. Wyatt, in an attempt to drive Johnny Tyler out of the Oriental (a saloon that Tyler had taken up in and driven out all of the high class play due to his crass interactions with his fellow patrons), walks up on Johnny Tyler and tells him that he is in his seat. After Tyler gets angry, he exclaims to Wyatt that “you run your mouth awful reckless for a man that don’t go heeled.” Wyatt responses quickly with “No need to go heeled to get the bulge on a tub like you.” Now going ‘heeled’ does not reference his shoes; but the term did come to mean carrying a gun because of feet. The term ‘heeled’ was in reference to the strapping on of spurs to the heels of gamecocks, giving them an advantage in a cockfight. So in the wild west, ‘going heeled’ meant that you are better off carrying a weapon.

Johnny Tyler got more and more angry when Wyatt threw insults back at him and Wyatt ended up slapping him multiple times. “Tyler, obviously not reacting to Wyatt’s inciting, stood there bleeding from his lip. Wyatt looks Tyler in his eyes and says, “you skin that smoke wagon and we’ll see what happens.” He is referencing his pistol and even tells him to ‘jerk that pistol and go to work’; but Tyler just stands there. He grabs him by the ear and drags him outside and throws him through the swinging saloon doors. Despite how awe-inspiring that this scene may be, what in the world is a smoke wagon? The smoke wagon is actually in reference to a stagecoach-style, single action revolver. The smoke wagon (is even produced by Taylor’s and Co and is even called the “Smoke Wagon”) featured a low-sitting hammer and wider-style sites that allowed the shooter to acquire his target quicker with a smooth hammer and trigger pull.

The men in Tombstone were more than able to back up their talk; but it is fun to hear the devious insults being slung back and forth like the bullets that were also flung much too frequently. Much like the words that were brazenly carved upon a headstone outside of the actual city of Tombstone; which is visible in the opening scenes of the movie: “Here lies/Lester Moore/Four slugs/ from a 44/No Les/No more“. The grave stands as a marker that words and bullets are equally as important in this time. Words made the reputation and bullets backed them up.

Tombstone movie poster attributed to Studio and or graphic artist – Fair use, https://en.wikipedia.org/w/index.php?curid=15766779CC