In Shakespeare’s infamous play Romeo and Juliet, Romeo says, “What’s in a name? That which we call a rose by any other name would smell as sweet.” This famous quote was, of course, referring to the woman that he loved belonged to a family that his family had feuded with for ages. Despite his distaste for names; just the mere mention of a name is enough to make someone think a certain thing. Want me to prove it? Hitler. You immediately had thought about him, didn’t you? Jack the Ripper. Without knowing what he looked like, you know his reputation and who he was.

Take for instance people who will in infamy or are famous. We can even argue the greatness of people based on just the legacy that they are or have left behind. I haven’t even forgotten what my Uncle told me when he told me and my friend when I was in high school that we should be cautious about how we live because your name has things attached. We can be reminded of people’s lives and can even argue greatness:

Alexander the Great vs. Julius Caesar

Elvis vs. The Beatles

The name of Jesus has no real comparison. Jesus’ name is all-inclusive. There are over a hundred listed biblical names of and references to Jesus. He was called ‘Advocate’ as found in 1 John 2:1 all the way down the alphabet to ‘Word of God’ in Revelations 19:13.  He’s the Rock, the Lord of Lords, the Morning Star, the King of the Jews, the Lamb of God, the Bread of life or the Cornerstone.

His name brings Peace.  His name makes the Devils’ knees buckle.  But what about appearance? There are no real references to the way that Jesus looked.

I am by no means making a claim that that picture is by no means to be taken as an exact representation of what Jesus looked like…but it is a re-creation of an adult man (in his mid-thirties) who lived in and was from the same place at the same time that Jesus lived. Forensic scientist Richard Neave led a team that used a skull (that was carbon dated back to the time of Jesus and was found in a grave near where Jesus lived) and using modern technology recreated what that actual man looked like.

For North Americans, this other picture of Jesus that I ask you to think of is that of a taller, lean man with long, flowing, brown hair (most of time with blonde highlights), a nicely trimmed beard (or no beard at all), fair skin and light-colored eyes much like the one that hung in my grandma’s Sunday School class.  This image is more familiar to Americans; especially those who have been to Sunday School or a Christian church; but is it a flawed representation? According to the Gospel of Matthew, when Jesus was arrested in the garden of Gethsemane before the Crucifixion, Judas Iscariot had to indicate to the soldiers whom Jesus was because they could not tell him apart from his disciples. Jesus’ features were obviously like that of the other Galilean Semites of that time. Nowhere in the New Testament was Jesus ever described, nor have any drawings of him ever been uncovered. Since we know that Jesus’ body is now in Heaven, we cannot use his exact skull to get a picture of what he looked like. 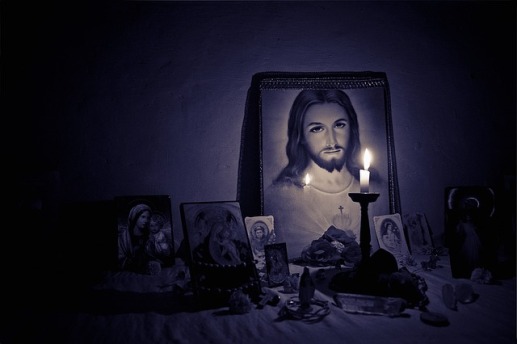 I remember reading a 2015 article from Popular Mechanics where a forensic study used the same technology that forensic anthropologists use in criminal investigations or in other historical investigations to reconstruct a person’s appearance to show a true depiction of what Jesus could have looked like while on Earth. It made me think about the picture of Jesus that used to hang in my parent’s house. Had the creator been inherently wrong or was the depiction done purposely? Had we as an American and predominantly white society been so caught up with uplifting ourselves that we wanted to ‘Americanize’ Jesus? Sadly it isn’t just our interpretation of Jesus based on the images created by white Europeans centuries ago that are guilty of this. Jesus’s appearance is often portrayed as black, Asian or even Hispanic; depending on where the depiction is created. So why do we have hang-ups about what Jesus looked like? Could it be that the original depictions of Jesus had never seen anyone from that country before or did they purposely paint that depiction of Jesus to better service their culture?

I said all of this to say this…our outward appearance has nothing to do with our inside.  Whether Jesus had dark curly hair or long brown hair, his life is what he should represent.  If we were visited by the Jesus of 2000 years ago, how accepting would our Americanized (or wherever you are from) hearts be? How close-minded would our hearts and minds be to our Savior?  When we are visited by people of different races, nationalities, backgrounds, socioeconomic classes….how do we react?  People with tattoos, weird haircuts, different styles of clothing, piercings, loud music, maybe even someone of a different race or socioeconomic class….how do we react to them? Do we push our noses

high in the air and be happy in our nice little Christian world? How do you think Jesus would react to someone? Are your thoughts and words mentally stoning them? Jesus wouldn’t and doesn’t judge people based on their appearance, and I think that the socioeconomic classes that have been prevalent in Christian culture in the last hundred years have placed so much importance on the appearance that our true Christian calling has been lost. If Jesus were walking this Earth right now, he would not drive a Cadillac and live in a mansion? Being a Christian isn’t easy, but we let need to let the love of Jesus rule our hearts and minds and not put so much priority over what color the carpet is in the sanctuary or discussing the new man at church’s tattoos. We need to put more priority on what our lives represent and less on things that don’t bring any positive edification to God.  We need to be less like the Pharisees and Sadducees (whose fear of losing their political and socioeconomic class due to Jesus’ teachings led to him being crucified) and more like the first Christians who dropped their nets and followed Him.

Don’t think of me being negative when I say that I don’t think that there was anything especially beautiful or majestic in the physical appearance of Jesus. But there is a simple fact: Jesus didn’t attract a large following based on his physical appearance. The Lord’s appearance was not the point of his life and death. The Lord is not remembered for his face but he now has glory in his name. I merely want you to remember that the legacy and name that we project should be the basis of how we should live. It should be about how we live and not what we look like; because our soul lies in our hearts and is not projected on our faces.

Christ before Caiaphas by Hendrik Goltzius – This file was donated to Wikimedia Commons by as part of a project by the Metropolitan Museum of Art. See the Image and Data Resources Open Access Policy, CC0, https://commons.wikimedia.org/w/index.php?curid=60873975