Writers find their inspirations in a variety of places. In the comic book world, Stan Lee claims that Tony Stark aka Iron Man was influenced by Howard Hughes. Howard Hughes was a former richest man in the world who was an aviation pioneer, defense contractor, and ladies man while Tony Stark is a multi-billionaire playboy who is a defense contractor that creates a flying suit of armor. Kitty Pride aka Shadowcat was drawn to look like a teenage version of Sigourney Weaver but her name came from a classmate of the character’s creator. John Byrne had a classmate named Kitty Pryde and he loved her name so much that he asked her permission to use it in a comic book. She gave him permission to and he brought Shadowcat aka Kitty Pride to life in the Uncanny X-Men comic #129. While they may not be exact, the inspiration is still there. For folks in Chester, Illinois; there is no doubt that Popeye the Sailor and other characters in the comic strip had very real and almost uncanny inspirations.

Much like the origins of fellow comic book superhero Superman, Popeye the Sailor started off on the pages of a comic strip; and Popeye and his wacky universe of characters were created by E.C. (Elzie Crisler) Segar. While Popeye made his first appearance in January of 1929 in a comic strip entitled “Dice Island” as a rough sailor for hire, he was a support character for owner of the boat in which he had been hired to man. It was on this boat that he would be introduced to the thing that would be the beginnings of his powers. Popeye received “good luck” from rubbing the feathers of Bernice the Whiffle Hen (Bernice was also introduced in the Thimble Theatre comic strip but was introduced shortly before Popeye in 1928.) Bernice’s owner, Castor Oyl had hired Popeye to man the ship while they were venturing to Dice Island (which was home to a huge Casino. Oh you caught that? Yes you guessed it. Castor Oyl is the older brother of Olive Oyl. Olive Oyl and her family were created many years before Popeye but despite Popeye and Castor Oyl’s hi jinx; Popeye’s popularity rose and rose. Popeye became the main protagonist of the comic strip and after Olive Oyl dumped her boyfriend Ham Gravy (yes I know); the two of them would become one of the most recognizable cartoon/comic book couples of all time.

By that time 1932 rolled around he was receiving his ‘super-strength’ and incredible abilities from eating spinach. Though he was strong sailor with incredible luck and resilience thanks to Bernice (she even healed Popeye’s bullet wounds after he was shot at the casino); Popeye started to favor spinach due to it being a healthy source of strength. That also could have been that while in Africa, Bernice the magical Whiffle Hen met a boy hen and they lived happily ever after.

The storyline sadly has continuity and there are numerous plot holes and contradictions in the characters from then on; but there is one thing that is the same: Popeye. Popeye was a pipe smoking, squinty eyed sailor with a prominent chin, a strong muscular physique and wasn’t scared to throw his giant fists around. Another thing that is the same is that these characteristics are almost mirrored to the real life Popeye that lived in 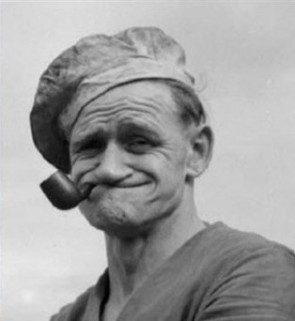 Segar’s hometown of Chester, Illinois. With a squinty eye, prominent chin, wooden tobacco pipe, and athletic build; Chester local Frank “Rocky” Fiegel had a propensity to engage in fistfights in the local tavern. Coincidentally this was the same tavern that the short, chubby opera house owner William “Windy Bill” Schuchert would send his employees to purchase hamburgers for him. See where I’m going with that one. So, we have a Popeye and a Wimpy but what about his infamous skinny, bun haired love interest Olive Oyl? Well she could be found down at the general store in town as a uncommonly tall, skinny, straight framed woman named Dora Pascal whose dark haired bun sat close to her neckline.

Though Popeye isn’t your contemporary comic book superhero, (though many historians consider Popeye to be the precursor to the superheroes that would go on to be in the comic books) he is one of my favorite characters of all time. He has been in countless cartoons, comics, comic strips, movies, and was even portrayed on the big screen by comedy legend Robin Williams. But honestly, I think it’s a bit more awesome, knowing that Popeye was loosely based on a real person that Segar had seen in his hometown. Knowing that someone like Popeye existed brings a smile to my face. I just wonder who had the awesome anchor tattoos!

Bud Sagendorf’s Cover of Popeye #50 comic book from October 1959 by and attributed to Source, Fair use, https://en.wikipedia.org/w/index.php?curid=3035220

Featured Image – Frame from Popeye the Sailor 1933 cartoon by and attributed to Source, Fair use, https://en.wikipedia.org/w/index.php?curid=13612364

Thimble Theater Popeye comic strip from 1951 by and attributed to Tom Sims and Bill Zaboly, Source http://ilovecomix.myjungledisk.com, Fair use, https://en.wikipedia.org/w/index.php?curid=22243233