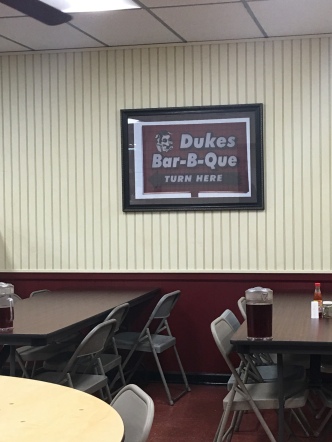 There is nothing that is inherently elegant about a BBQ restaurant in the South. You won’t normally find a Roasted Pigeon with a Warm Foie Gras Sorbet like you would from the Villa Crespi in Orta, Italy. You won’t find fresh out of the water Langoustines as you would at Bjorn Frantzen in Stockholm, Sweden. You won’t find a $130 Waygu Tomahawk steak like you would at the EDGE restaurant in Colorado. You also won’t find the $115 Red’s Porterhouse at Halls Chophouse in Charleston, South Carolina; but if you travel an hour and 20 minutes Northwest to Orangeburg, South Carolina you will find a place that is worth its weight in gold to anyone who steps through the sticker-laden glass doors. You’ll find that that drive has led you to a place that lays out Southern comfort food at its finest. You’ll find the sweet and sultry taste of their Southern style pulled pork BBQ matched with their South Carolina style sauce, fried chicken, delicious BBQ chicken, fried livers and gizzards, all the fixins’ that you can imagine, and most importantly the

hash and rice. The hash was something that I was unsure of when I was first introduced to Dukes BBQ but it is essentially somewhere between a soup and a stew. Despite the taste and texture being different than anything you’ve ever had; over some fluffy white rice it is absolutely delicious. Besides the meat selections you’ll find the Southern comfort food fixins’ on their all-you-can-eat buffet. Delicious macaroni n’ cheese, baked beans, collards, fried okra, fried potatoes, green beans, lima beans, rutabagas, yams, and almost anything that Southern part of your soul desires. The cold bar features homemade banana pudding, macaroni salad, pickled beets, potato salad, slaw and an assortment of pickles. Now pickles may seem like an odd pairing for fried chicken but just trust me; I’ve been down this road before. 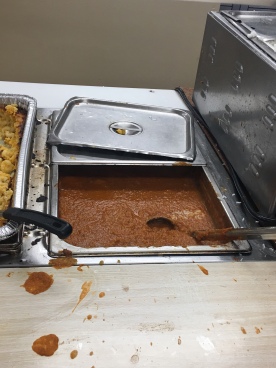 Dukes BBQ is a South Carolina staple. After the Dukes recipe came from the Baltzingers who had Carolina BBQ in the mid 20th century, after Dovie Dukes married into the Baltzinger family. Dovie gave the recipe to all of his brothers and sisters, but it was his brother Earl who opened the first Dukes restaurant in 1946 outside of Orangeburg but later moved it into town. My last visit was to this location but all 7 of Earl’s brothers and sisters opened up Dukes restaurants. You won’t find one within a 30 mile radius of their kinfolks restaurant because that was the deal originally set forth by the family. As the years flew by, their children and extended family opened up restaurants and there are currently 14 locations across the state to enjoy the best Southern comfort food that South Carolina has to offer. 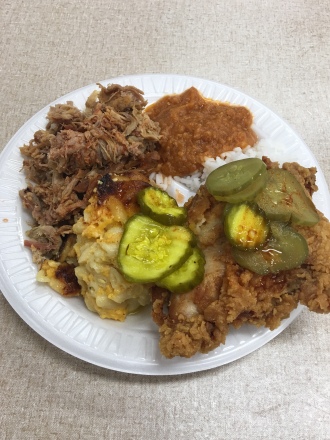 Their award winning restaurant has been picked by Southern Living magazine as one of the best BBQ restaurants in the nation, been given Trip Advisors Award of Excellence, was picked as best BBQ Restaurant and best buffet by countless magazines and organizations and has an accolade from this blogger who says that its the best BBQ restaurant in the state of South Carolina. You won’t be disappointed in the ambiance or the old fashion Southern recipes that are always prepared on site. So grab your jacket, pack up your kids, call your friends, and go experience down home, Southern comfort food at its finest. I’ll meet you there. 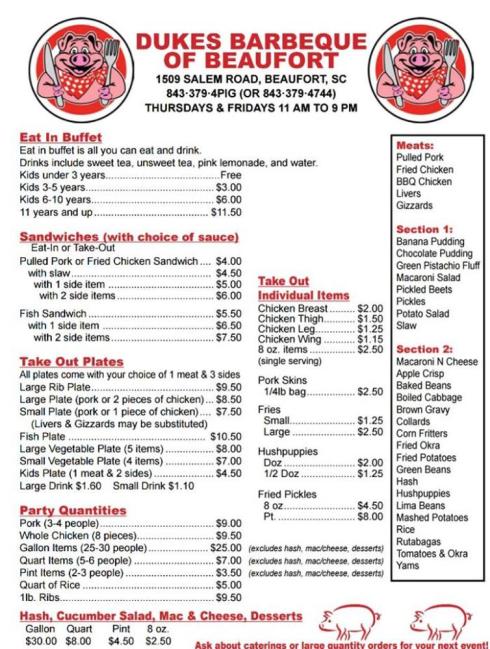