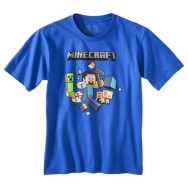 Today I was reminded of the image of Daniel we he prepared for baseball practice Saturday morning. I had noticed that Daniel had donned one of his many Minecraft t-shirts. I felt proud of his willingness to be a billboard for something that he loved other than to be subjugated to wear one of his Under Armour shirts to potentially fit in with the rest of his teammates. I was also reminded at how extremely popular that this seemingly simple game had become.
Minecraft, if you didn’t know, in the world of video games is a sandbox style video game. A sandbox style video game is formatted to where the player has been freed from the usual structure and direction of the video games that we are used to playing. Remember how when we first started to play Super Mario Bros and you could only go right and could only go left for a short period of time….well that is all taken away in a sandbox style video game. The game is called sandbox because, like your child’s sandbox, there are no rules and you have very free, open-ended play. These games mostly take place in an open-world setting to allow the freedom for the player to do, mostly, as they please. Minecraft is the epitome of the ultimate sandbox video game. The simplistic makeup of Minecraft is made up of textured 3D cubes. This procedurally generated world allows players to explore, gather resources, and build amazing structures using the 3D style blocks. The beauty of Minecraft is that the only limit to your creativity is your own imagination. That cliche term of phrase most definitely applies when the player decides to spend time in the creative mode when the player has an unlimited amount of resources that will allow them to build anything that their heart desires. The player can also choose to venture into the adventure mode or the survival mode which requires the player to gather their resources for anything that they want to build while maintaining their health.

Daniel started playing this game a short time after it came out in 2011 and when he first started playing, I literally didn’t see the point. In this open-world format, there is no specific goal for the player to accomplish so a lot of his time was spent bu

rying dynamite blocks, watching them blow up and destroy the land around the area. The game appears at first glance to be a cheaply generated game where the player just flies around (the player can fly in the creative mode), breaks blocks and place more blocks in other places to build miscellaneous items. It wasn’t until Daniel started to explore the game further that I realized the complexity and creativity of what had appeared to be so simplistic in the beginning.

So between killing the monsters in survival mode, which seem to spawn out of mid air, the creative adventure in the creative mode or just the general imagination that is required to play this game I all-in-all approve of this game. I even took a couple of weeks to create a Castle Grayskull and Snake Mountain (famous He-Man related places). I don’t mind that Daniel continues to love this seemingly simple game where he branches his ever extending imagination, I just hope that Stampylongnose (Youtuber) will finally add Daniel to his Love Garden.