February 27th marked the 240th anniversary of the 1776 Patriot victory over the Loyalists at the Moore’s Creek Bridge in Currie, North Carolina, USA. This magnanimous victory led North Carolina’s delegates to be the first to vote for Independence from Britain in the meeting of the 1776 Continental Congress. This victory happened mere months before The Battle of Fort Sullivan in Charleston, South Carolina, USA on June 28th, 1776 which was days before the birth of our nation on July 4th, 1776 when we issued our Declaration of Independence. 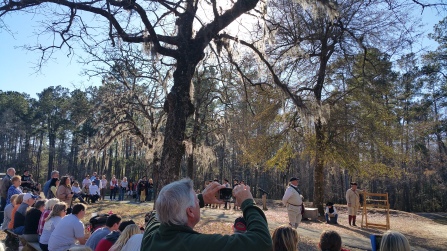 240 years later, my son and I stood with thousands of other curious patrons staring at re-enactors that appeared to be plucked from the battle fought two centuries before I was even born. We stood adjacent to the Moore’s Creek Bridge which when partially dismantled on February 27, 1776, and I could almost see the nearly 1,000 free male North Carolinians between the ages of 16 and 60 regardless of race that waited quietly with the muskets and hunting rifles that they provided next to vigilantly prepared cannons. The cannonballs were anticipating the lighting of the wick, to thrust through the ranks of the British soldiers that were forced to traverse the dismantled bridge one by one. The remaining boards of the bridge had been doused with greasy substances, to make the short trip almost impossible to carry out. The ghosts of the centuries old men shook in their spectral form as the line of musket armed re-enactors fired their period correct muskets. We held our ears tightly as the cannons echo reverberates while smoke bellows into the moss laden trees above our heads. I hear the whiz of a drone above my head, I hear the clicks of a camera phone and see the fake smile of a teenage girl turned from the pretend malay to have the display for her selfie’s background. My immersion in this display is over.

As we walk away from the battlefield, we stop by the tents of the re-enactors that display ‘the way life was’. As we stop to hear the bonnet clad women explain how important beer 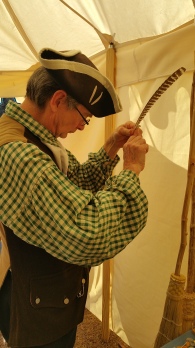 was to 18th century life, Daniel sees the smoke from the blacksmith’s fire bellowing in the distance. We meander from tent to tent viewing the reenactment of a more primitive life. At the first tent we are greeted by a man in the precise time period garb. He invites us into his tent to view the handmade toys and household items that he and his wife have made to display the versatile items. We walk through the tent and on one of the tables sat a short knife and the man explains that it is called a pen knife and the current uses of the term ‘pen knife’ is actually inappropriately named because pen knives were actually made to carve the tips of bird feathers so that the user could make a proper pen. Daniel, always bleeding with artistic juices, wanted to get a pen and ink combo to do calligraphy. So we walked away with a hand made quill and small vessel of homemade walnut ink. As Daniel walked, staring in amazement at his new acquisition, we came to the next vendor.  Inside this tent we beheld a short old woman dressed in a beautiful, pale yellow dress. Her wire rimmed glasses sat gracefully on the tip of her nose. She was a

purveyor of herbs, teas and other organic items. I handed her my credit card and she slides it on the small device atop her iPhone 6s to pay for my freshly cut and dried chamomile tea. She asks if I would like my receipt emailed to me, I laugh and say ‘no ma’am’. I think about the dichotomy of that situation and I follow Daniel to the blacksmith. The blacksmith hammered away at rivets to properly secure a stove shovel as his apprentice stokes the fire. I can see that Daniel is enamored by this display. (We love to watch the Blacksmiths and craftsmen on the AWE me channel on Youtube. Man at Arms: Reforged is our favorite and they create recognizable weapons from popular Movies, Video Games and TV shows.)

I had heard the blacksmith slam the hammer on pieces of forged metal on the anvil for as long as I could stand it. My ears rang as Daniel and myself walked to our last destination. “The Powder horn decorator”.  It was nearing the end of the day and most of the reenactors had since forgotten about protocol and started to drink canned Sun Drop sodas and began to change from their centuries old garb. The main Powder Horn decorator came from behind a curtain in his tent wearing blue jeans, sneakers and a touristy

t-shirt from Long Island. He walked off to I guess get a bite to eat when his apprentice tried to save our trip into their tent by describing the process and to show us some of the pieces that he was making. He asked us if we were really into history to which Daniel gave a resounding ‘YES!’. The powder horn decorator’s middle age apprentice smiled and said “yeah, me too. That’s why I do this. I love to watch history stuff on TV. I love Game of Thrones. Do you watch it?” I nodded my head yes and said that me and my wife had fallen in love with it but had just began watching it and were trying to catch up on the On Demand channel on Direct TV. So, here I am…in the middle of a tent with a man dressed like a 1770s poor merchant talking about a Medieval times TV show on HBO. He looked at Daniel, said “I hope he ain’t watching it yet” and started laughing to himself. I said yeah its a little above his age group but he looked at me and said but that’s why I like it, all the hot women.” I gave a grimace smile and politely walked away.

We walked away and Daniel smiled at me and said “Dad, thank you for today, I have had an awesome time.” That made me smile and I realized that we both enjoyed our time viewing a window into the past even when reality had to rear its ugly head by the beeping of my cell phone to tell me that it needed to be charged.  Off to our next adventure.